As far back as 1999, former Chancellor Gerhard Schröder was announcing the rescue of one of Germany’s largest construction companies, Holzmann AG. Around two years later, the company finally went broke: an inglorious end to a corporation with over 150 years of history. It is in no small part due to the global economic crisis that the cry for state aid from large companies is currently increasing in volume: since the Lehman bankruptcy in September 2008, bank loans have been granted only on an extremely restrictive basis, a state of affairs that can also be traced back to the worldwide loss of confidence in interbank trade. While troubled companies such as Opel, Schaeffler and Arcandor are on everyone’s lips due to high levels of public interest – and are being discussed within the political arena – the question arises as to who will prop up the faltering SMEs and smaller ventures that together account for 70.5% of German jobs. As long as companies are making a profit, government deregulation  is pushed forward by the lobbyists; all bets are placed on the “free market”, particularly in the financial sector. If losses are reported in the context of a downturn – though they are often, primarily, as a result of management mistakes – there is scarcely a company too proud to petition the state for help. Privatising profits and socialising losses can never be an acceptable solution. 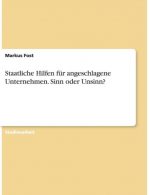